Decoding the Sahelian part of ISWAP’s ‘And the [best] Outcome is for the Righteous’ (published on June 15, 2019) – Islamic State’s recycling of old footage to advance its cause and influence in the Sahel.

The Islamic State’s (IS) reconstitution in Africa has become a self-fulfilling prophecy. For years, assorted media outlets (of various credibility) “reported” the presence of IS leader Abu Bakr al-Baghdadi himself in Libya (or even in the Nigerien desert), sometimes accompanied by reports on alerts raised along the Tunisian and Algerian borders. Meanwhile, think tanks and pundits foresaw an exodus of jihadi militants from the Middle East to Africa, foreign terrorist fighters (FTFs) returning to their countries of origin in order to carry out attacks, establish new cells, or reinforce the ranks of pre-existing groups. Yes, there’s where IS will reconstitute itself..in Africa.

The crux of the matter is that this would be done without the presence of any self-styled “Caliph” on the African tectonic plate, or any major influx of FTFs relocating. The local environment was already proven fertile ground for militant expansion. As witnessed in the Sahel throughout the year of 2018, a ceaseless deterioration of the subregional security situation self-sustained by a chaotic mix of armed actors and constellations, misguided government responses, abuses by state forces, and intercommunal violence, triggering an unprecedented humanitarian crisis. However, amidst the fall of the so-called “caliphate”, the organization would channel the support it had accumulated in recent years in the Sahel (and elsewhere) into its media and propaganda apparatus.

Preceding the capture of the last pocket of IS-held territory in Baghuz, Syria—the organization began a media campaign pivoted to the African continent. In Tunisia, IS ramped up its media activities which in previous years had been on energy-saving mode. The organization created the Central Africa Province, grouping rebels of The Allied Democratic Forces in the borderlands of the Democratic Republic of the Congo (DRC) and Uganda—founded in the mid-1990s, and militants of a nascent insurgency in Cabo Delgado, the northernmost province of Mozambique. Analysts argued that while IS’ expansion model differs from that of Al-Qaeda, IS had now set the bar low, the group was “happy to rumble in the jungle“. Significant attention was also given to the Sahel, Islamic State Central (ISC) had re-established communications with its Sahelian affiliate—Islamic State in the Greater Sahara (ISGS). Oaths of allegiance to al-Baghdadi had been given in Mali and Burkina Faso—accepted in persona by the IS leader in a rare audiovisual appearance in late April, alluding to ISGS emir Adnan Abu Walid al-Sahrawi as the subregional interlocutor. Following a two-and-a-half-year-long hiatus in communications, ISC now had plenty of material to exploit.

On June 15, in a video entitled ‘And the [best] Outcome is for the Righteous‘, militants of Islamic State’s West Africa Province (ISWAP) renewed their pledge of allegiance to al-Baghdadi after a lengthy speech by an ISWAP commander named as “Sheikh Abu Salmah al-Mangawi”. Abu Salmah affirmed that military campaigns and operations by national and regional forces had failed to liberate Lake Chad and impose peace, rather the militants had shattered the borders by opening up several municipalities in Nigeria and expanded their operations into Niger and Chad.

The renewal was ensued by oaths of allegiance purportedly given in Mali and Burkina Faso. Indeed, IS has made headway in the Sahel and the successive pledges of allegiance emanating in the region have provided the organization with substantial propaganda capital. Add to this, a step-change in capacities of its Sahelian branch on the operational level, coinciding with the resumption of communications between ISGS and ISC—translating into action on the ground. Capacities dependent on local inter-armed group dynamics between ISGS and Al-Qaida’s Sahelian affiliate Jama’ah Nusrat al-Islam wal-Muslimin (JNIM), transfer of competencies by migration of fighters, and coordination and cooperation between the two, while the inclination to conduct spectacular attacks reasonably would have been fueled by ISGS reconnecting to the global. However, by decoding the footage we may find a better measure of the actual value of the pledges in Sahel.

A video cut takes us from what presumably is Nigeria to Mali. A gathering of approximately forty young men in the bush of Intameda, situated about ninety kilometers east of the regional capital, Gao. Several fighters are recognizable from a previous by ISGS self-produced media item, namely the “Battle of Tongo Tongo”. The man in the middle of the gathering with his face uncovered is Aboubacar Ould Abidine (aka Abu Zoubeir), a younger paternal cousin of Sultan Ould Bady (aka Abu Ali)—an early Sahelian member of Al-Qaida in the Islamic Maghreb (AQIM), and co-founder of the Movement for Oneness and Jihad in West Africa (MUJAO).

Ould Abidine is a former member of the Arab Movement of Azawad (MAA), part of the Coordination of Azawad Movements (CMA), signatory of the Algiers Accords, and also a former officer of the Operational Coordination Mechanism (MOC), or mixed patrols.

Ould Bady himself would have been present at the meeting about two years ago, discretely and in contrast to his cousin, not visible or identifiable on the footage. In early August 2018, Ould Bady turned himself in to Algerian military authorities in Tamanrasset, Algeria.

The base in Intameda was destroyed amidst a joint operation on February 17, 2018, two days after was Katiba Salaheddine’s pledge first reported (alongside JNIM cells that had defected). Mauritanian journalist, Mohamed Mahmoud Abou al-Maaly hinted to the alliance taking shape two months before the pledge was made public, while Sidi Kounta explicitly made reference to al-Sahrawi and Ould Bady. However, Katiba Salaheddine, had already since mid-2017 begun integrating into ISGS. Ultimately, the group was defeated in rural Gao, those not already absorbed by ISGS were dispersed, Katiba Salaheddine was defunct as a group, and the leaders had left the field. The image analysis below suggest that the footage used in the video is from the same gathering as the second photo featured as a still photo in the “Battle of Tongo Tongo“.  During another shorter sequence, is another unidentified individual exposed with his face uncovered, who  would be another of Ould Bady’s cousins, representing the core of the group founded back in 2013. The same individual is also featured on the still photo from Katiba Salaheddine’s pledge in “Battle of Tongo Tongo”, although back then with face covered.

The video now cuts into another view and gathering of men piling up hands to give the oath of fidelity, nothing really provides any hint about location, only a basis for speculations.

The following screen is a bit more revealing, previously featured as still photo in an Amaq report on a complex mass-casualty ambush against the Nigerien army not far from Tongo Tongo, and an attempted prison break targeting the Koutoukale high-security prison. In the midst of the gathering, a 9K32 Strela-2 (SA-7 Grail) is visible, most likely the same unit featured in the 2016 oath-giving-ceremony.  With this in mind, the actuality of the footage again becomes subject to scrutiny, possibly more old material recycled. While it’s hard to tell where and when the ceremony actually did take place, you can ask if a MANPADS with missing battery crisscrossed the tri-state borders for tacticool ceremonial purposes during the course of three years?

More or less subtle details could provide us with further clues, such as arms (you look for a few FN-FALs, but spot a couple of AK-74s, the former very common on the local Nigerien market, and the latter used by Nigerien forces), physical attributes, colour and style combinations of clothing, like how the headscarves are wrapped and so forth. For instance, note the sand camo and khaki fatigues combined with dark headscarves, frequently used by ISGS fighters in the Mali-Niger borderlands, but also around the tri-state border. The point here is that we’re trying to narrow down by combining multiple elements for plausibility without ignoring other aspects such as militant mobility.

Or the thightly wrapped grey headscarf worn on the fighter on the below screen grab, probably a Dawsahak (or Tuareg) fighter. Or in a second set of images, the possible presence of a Dawsahak-speaking commander in the midst of the gathering, comparing two images from two separate videos, again pertaining to the Mali-Niger borderlands, between Menaka and Tillabery.

A video circulating on closed local WhatsApp groups in the wake of the official release, showed a drowsy pledge by a few dozens of Burkinabe militants (identified as Fulani Djelgoobe) on a misty morning, presumably somewhere in the Burkina Faso-Mali borderlands. Far less impressive in terms of quality, numbers of fighters, and ambience when compared to the official ISWAP release that showed hundreds of fighters “aestethically” lined up with motorbikes and parading to the sound of the accompanying nasheed blasting. 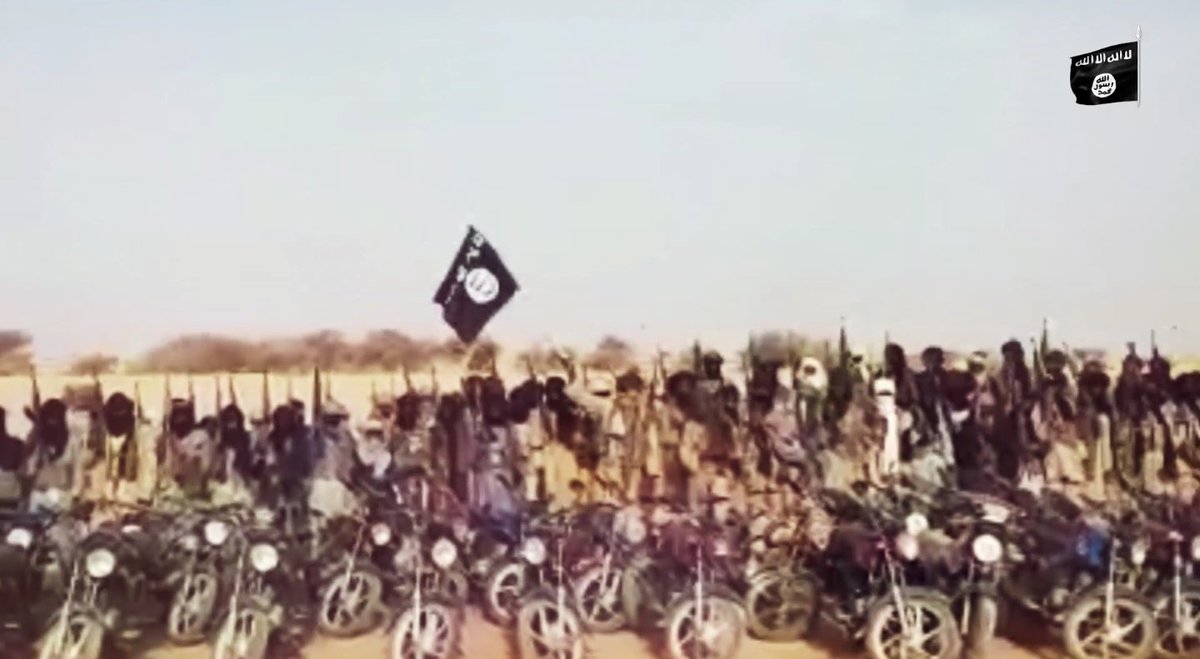 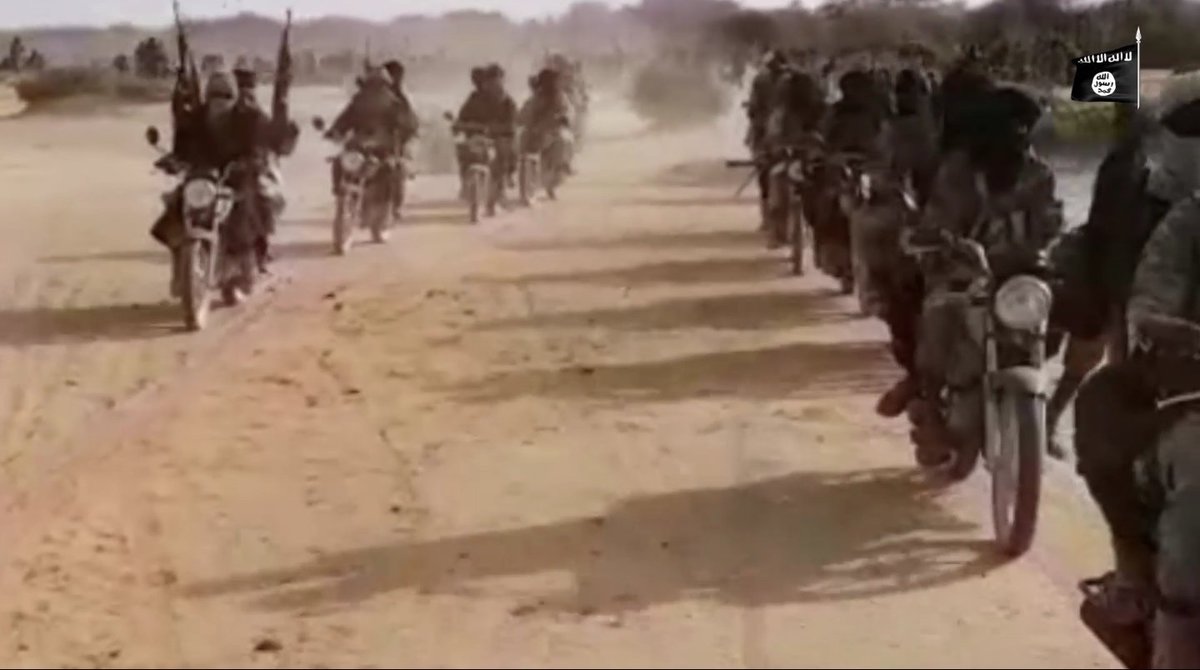 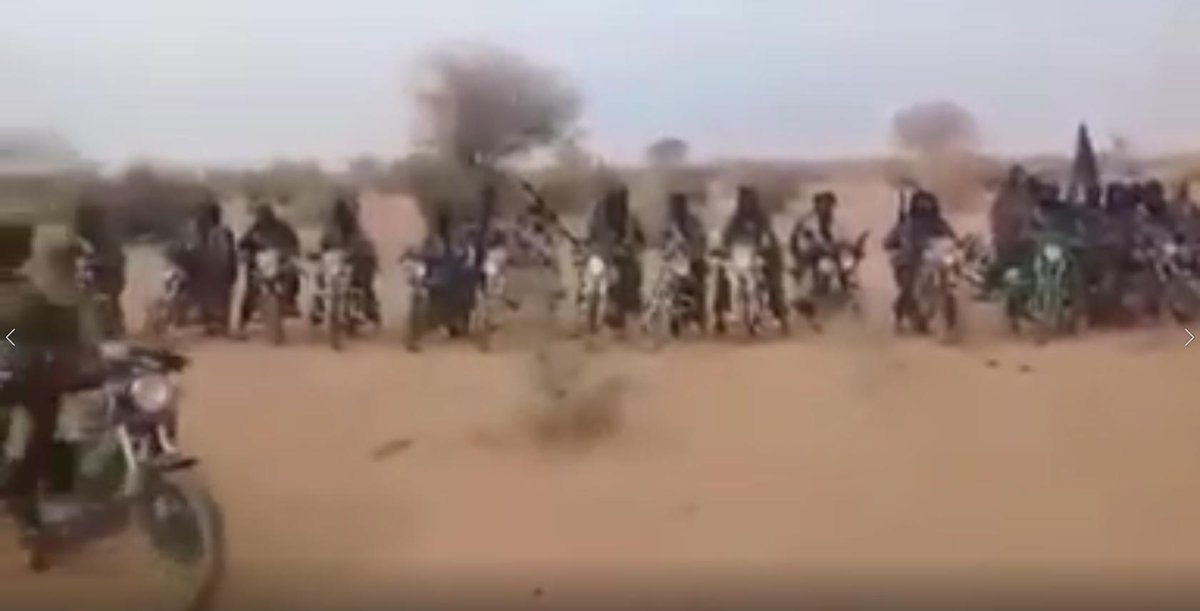 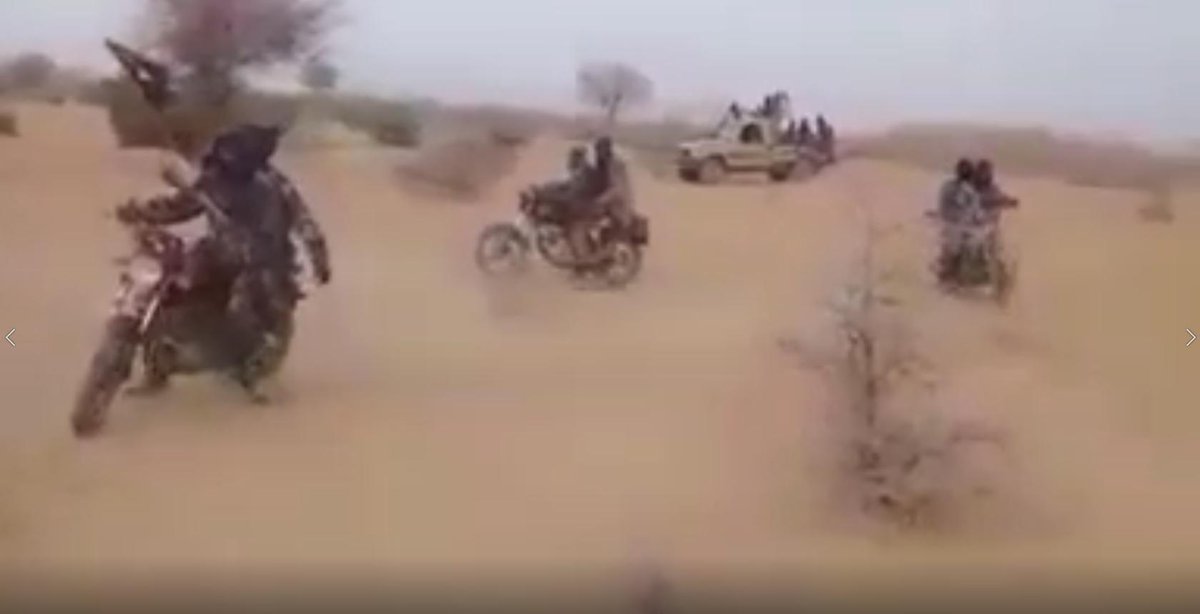 Screen grabs from the self-produced video circulating on WhatsApp

What this brief analysis concluded is that Islamic State in this release used old footage related to a group in Mali now defunct, probably used other old footage to visually amplify the impact of pledges of allegiance in Mali and Burkina Faso. Further, the organization likely took advantage of the relatively limited output of visual open-source material in the Sahel concerning jihadi militant groups, Thus, knowing they could pick, cut and mix according to preference, regardless of the age of the footage, as shown with the case of Katiba Salaheddine, that reportedly pledged allegiance in mid-2017, an event already announced in February 2018.